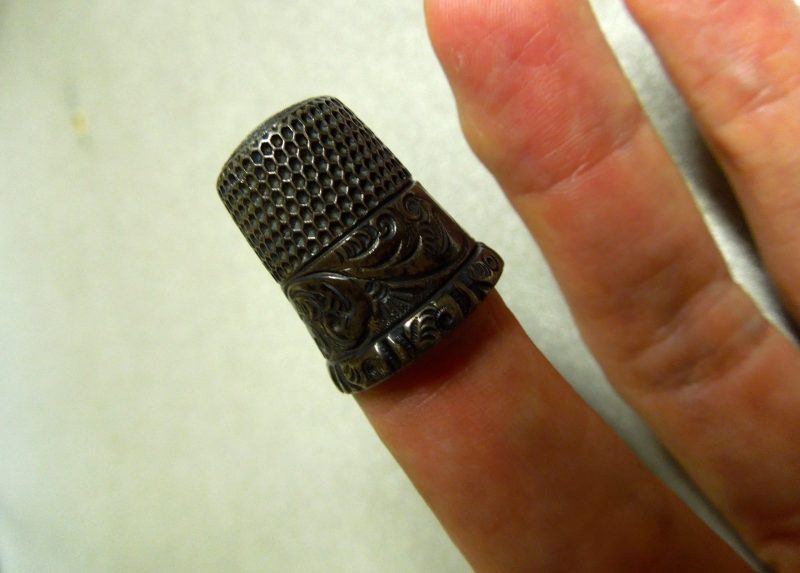 A few weeks ago my oldest sister had the idea that we girls should help Mom sort through her sewing room. For five or six decades, Mom has saved and stored supplies left over from craft projects, intending to repurpose them Someday. The result of all this packratting was a 10×11 room, walled with shelves and drawers and cupboards (themselves left over from a do-it-yourself kitchen project in the 80s), each filled with stuff Mom mostly managed to remember she had. (More impressive is that she could send you to the basement with darn good directions for finding nearly anything in the room.)

As we sorted under Mom’s supervision, the contents of two cupboards, six drawers, and forty-seven boxes were redistributed: a stack for the thrift store, a pile for the trash, a couple stacks for one sister, and more stacks for the other. Since I came by plane, my stack consisted of five tube socks (yes, five) and a thimble.

To an onlooker who didn’t grow up in the vicinity of Mom’s sewing room, the boxes contained a hodgepodge of, well, flammable junk. But to the knowing eye, the boxes contained evidence of a lifetime of generous and creative love. Sure, my mom made a good number of things for herself and to beautify her home over the years, but she wouldn’t have needed nearly as many boxes if that were all she did. No, those boxes testified to much more:

Pins and spools and buttons and snaps and hooks and fringes and wire and beads and glitter and paint and foam and who-knows-what-THAT-was-for—Seriously, she saved everything. A yard here, a handful there, and before long, she had forty-seven boxes, six drawers, and two cupboards.

Why did she save it all? Well, because she can’t stand to throw things out if they might be useful to her or someone else someday. Someday that denim could become another quilt. Someday that fabric could make a wall-hanging. Someday she’d finish those dolls and complementary wardrobes. Someday those spools could be good for only she knows what. Someday.

She finally decided Someday had come. It wasn’t the Someday she perhaps anticipated for all those decades, but it was Someday, nonetheless—the day to use those treasures for something else. It was the day to pass on beads, buttons, foam, and glitter to daughters, granddaughters, and great-granddaughters who will spin their own gold from them. It was the day to box other things so thrift store shoppers will find the perfect items for their own crafty visions. It was the day to say, “It’s all right that I never made all those things I thought I might. I made enough. Now someone else can make the rest.”

And she’s right. She made enough and then some. That 10×11 room held forty-seven boxes, six drawers, and two cupboards of evidence that my mom has never been bored and that her frugal life is better described as generous than stingy. For more decades than I’ve been alive, she has lovingly made clothes and toys and dolls and home décor—some for love of the project and some for love of the recipient. And what is more, she planned to keep right on doing it.

Today was Someday, and it was a good day.