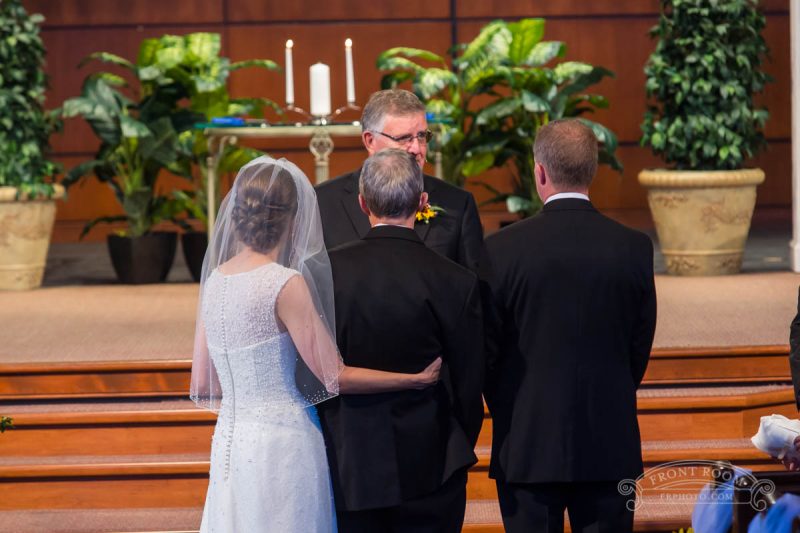 My dad and I stood at the double doors to the sanctuary, waiting for twelve bells to chime and the doors to swing open. Looking at me, he said, “I’ve waited a long time for this day,” and I said, “Me, too, Dad. Me, too.” What I didn’t say—because I would have come undone—is that I was so glad he was there to walk me down the aisle.

My dad had a stroke in 2005, and while he made a hard-won recovery, the effects of the stroke and age have caught up with him. In recent years, he has grown increasingly frail, such that I wondered if he’d even be around on my wedding day, much less able to walk me down the aisle.

What really happened on that perfect day, though, is that I walked him down the aisle. Somewhere between his eightieth and eighty-fourth birthdays, my dad’s “walk” became more of a shuffle, accompanied by a slump to the right. And somewhere between the double doors of the sanctuary and the seated guests, his shuffle became a precarious effort to keep his feet moving. I moved my right hand from resting on his arm to reaching around his waist, and with my left hand I held my bouquet and supported his left arm—willing him forward, one small step at a time.

It’s been a year and a half since the wedding, and time has not improved things. This is how things go, and we all know it—though we don’t really like to think about it much. Since I live five hours away, it’s relatively easy to avoid thinking about it most days. But I was there last weekend visiting, always a stark reminder that this is, indeed, how things go.

On this particular trip, the reminder came in the form of two ACE bandages that need to get wrapped around my dad’s swollen feet and ankles every morning. I watched as my mom and dad, who will celebrate their sixty-second anniversary this summer, sat facing each other in their dining room chairs. Dad held up one leg so Mom could reach and wrap it—none of these being easy feats. With her braced wrist (weak from a fall on a city sidewalk last summer) and her arthritic fingers, she labored through the work of wrapping his foot and inching a sock over it, one agonizing tug at a time. Then they repeated the slow, painful procedure on the other foot.

Midway through the task on the first morning we were there, my mom looked up at us and said, “For better or worse. We’ve had the better.”

I miss their better and grieve its loss. This side of heaven, I always will. But the day will come when that lost “better” will give way to the best—and that’s a day we can all look forward to.