It’s time to wrap up Daniel 7, but first we should talk a little bit more about the little horn. The little horn appears in two of Daniel’s visions: chapters 7 and 8. In the first, it is an eleventh horn on the fourth beast, displacing three horns when it appears. In chapter 8, we’ll see when we get there, it appears on the goat, growing out of one of the four horns that replaced one big horn. In the text, the little horn is terrifying – not at all like the conehead depicted in this less than terrifying Internet picture. 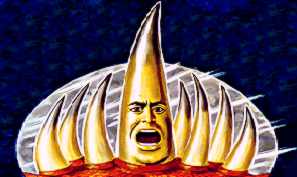 Let me warn you now that sorting out this blog post may take more time or interest than you have, but I include it for those of you who are more avid readers and students of Daniel.

Scholars who think the referents are the same will talk about the similarities between the two little horns, and scholars who think they are different will, obviously, talk about the differences. There are enough of both to make a decent case for the two views. As I’ve said before, I take the Greek view of Daniel’s visions, so I think there is one referent for the two horns: Antiochus IV Epiphanes, the second-century BC beastly ruler who terrorized the Jews.

Now, if you just read this and thought, “What?! Is Wendy saying there isn’t an antichrist? Does she think the prophecies of Daniel were only concerned with what’s ancient history?” the answer is “That’s not what I said.” What I said is that I don’t think the little horn refers to him (directly, at least) in chapter 7.

While the vision depicts events long past, its potential for future significance remains. Antiochus is long gone dead, but the pattern of his behavior remains and offers a pattern for what God’s people should expect: unspeakable evil and the promise of victory. The book of Daniel began this pattern in chapter 5 with Belshazzar, a defiant, blasphemous king. But the pattern intensifies as the book continues: Belshazzar was bad, but Antiochus would be worse. And the apocalyptic nature of the text provides enough eschatological hints to allow us to say, “Antiochus was worse, but the worst is yet to come.” The New Testament affirms and develops this idea in the man of lawlessness (2 Thess 2:3–8). John the apostle told his readers that many antichrists would come (1 John 2:18), a reality borne out by history. And while there may yet be “a specific worldwide figure who will accompany the final events of the end…the ambiguity of the New Testament texts themselves [should lead to caution] and lack of dogmatic certainty.”[1]

Such caution is especially important when we try to sort out apocalyptic literature. Its symbolism, ancient cultural associations, and intent to evoke emotion should keep us from pressing the details too finely. The message of Daniel’s vision in chapter 7 is simple enough: God will not abandon his people in their oppression, and those who remain faithful will share in his eternal kingdom. Let that be what we take away from Daniel 7.