It was Christmas 1997, and my church singles group was out spreading holiday cheer. On this particular Saturday, we were taking Christmas to a needy family whose name we had received from the local Rescue Mission. We had spent weeks gathering Christmas decorations and purchasing gifts for the entire family. We bought a tree and bagged a Christmas season’s worth of groceries before setting out on our mission of kindness. 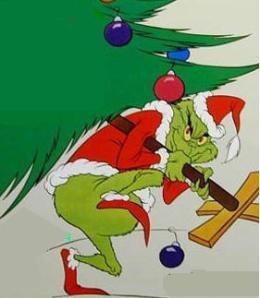 The designated family lived in an 8-family apartment building, and when we thought we had found the right apartment, we unloaded the van and hauled Christmas into the apartment of a family that was delighted to receive our generosity. About fifteen minutes into the holiday cheer, the family across the hall opened the door and noticed what was going on. As it turned out, they were the family that was actually expecting us. We had taken Christmas to the wrong family. Oops.

Stuck between a rock and a very, very hard place, we did what any fine Christian group would do… smiled sheepishly, packed up the things we had just unpacked, stripped every piece of Christmas from the apartment…and moved it across the hall, leaving a once-delighted-now-bewildered family in their Christmas-less apartment. If you have seen Dr. Seuss’s Grinch de-Christmas Cindy Lou Who’s house, you have a good idea of how this looked. We grinched a poor unsuspecting family.

In very different circumstances, I’ve been grinched, and I bet you have, too. It has happened when good-hearted, well-meaning people found themselves in a place where they could only cause pain. They didn’t set out to do hurtful things, but it happened, in spite of their best intentions. The grinching was, we might say, an accident of circumstances, and people got hurt.

If we’re honest, sometimes it can seem like God Himself has grinched us – teased us with the prospect of something delightful, something wonderful, something unexpected, and then taken it away. But the difference between people grinching us and situations where it appears God has grinched us is that there is no “accident of circumstances” with God. He is ever working for the good; He is always in control; He makes no mistakes; He is the giver of all good things. Indeed, it takes an act of faith to believe all this when God lets life hurt, but that doesn’t make it any less true.

P.S. Lest I misrepresent my friends from the original grinching story, let me tell you what happened after our scandalous behavior. While the larger group celebrated with family #2, a couple of us made things (mostly) right for family #1. We went to the nearest store and used our personal credit cards to buy another vanload of Christmas cheer.

One of our original gifts had been a Bible storybook that was perfect for an unchurched family, and wanting to include something similar in our second round of Christmas, we headed to the nearest Family Christian Store. Alas, they were closed (this was back in the day when there was a big fuss over FCS being open on Sundays; we would’ve been happy if they had been open after five on Saturdays). What should we do? What could we do? Only one thing: I happened to have a church key, and the church had a library. I raced out to church and raided the library hoping to find a book to, er, borrow, permanently. Happily (and, perhaps, providentially) the library had the exact book we had bought originally. I ever so carefully removed the library card pocket so the book would look almost new instead of lifted from the church library.

With everything in order, we descended on the wrong apartment for the second time in one day, and miraculously, the family let us back in. The second time we stayed.

P.P.S. Lest I misrepresent myself, I did confess my theft to the church staff on Monday morning, and given the circumstances, I was absolved of wrongdoing.