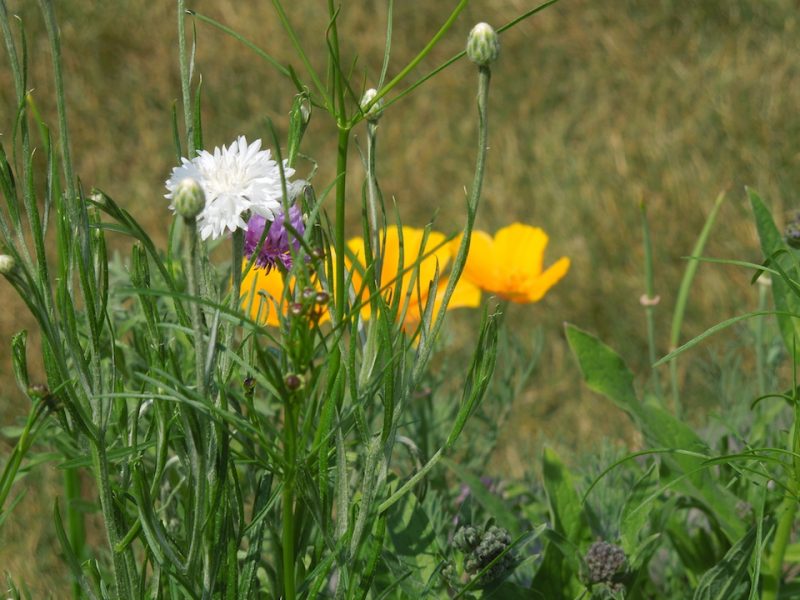 Much of my world right now is midsummer green—a jungle of tomato plants, a row of towering sunflowers, a trellis overrun by cucumber vines, and chicken wire covered with sprouting beans and peas. There is the promise of fresh produce everywhere I look. The sun is bright, the air is warm. Flowers are blooming, grass is thriving, and the trees are bushy.

Winter is as far away as it gets here in Minnesota.

But summer is fragile and fleeting. Tomorrow will have a little less daylight than today. The planter pansies are leggy and about done for the season, and before too long, we’ll see a few fiery leaves tucked among the green.

And if I’m honest, midsummer green in the garden isn’t all roses (or tomatoes or cucumbers). Summer is fragile in the garden, too. Three pepper plants just wilted themselves dead overnight, and a fourth has peppers that aren’t getting any bigger. A cucumber and tomato that outgrew the cover on our deck Vegepod are in distress. The lettuce refuses to grow, no matter where I plant it, and the eggplant looks dismal. The nasturtium in the porch planter is being eaten alive by an invisible pest, and doggone it if the planter on the driveway doesn’t keep taking nosedives. Then there are the blasted Japanese beetles. Don’t even get me started on them.

As in the garden, so too in life. I have been reminded of this lurking reality half a dozen times over the past two weeks. One morning I woke up to news that a friend from twenty-five years ago lost his five-month battle with lung cancer. The next afternoon, I learned that colorectal cancer snatched one of my long-ago cheerleaders, a 41-year-old mother of four. Yesterday I spent my midmorning break in tears when I heard that some high school friends lost their 19-year-old son, an only child, in a traffic accident. Then there was the news earlier this week that sweet friends are facing a cancer that wasn’t confined where we’d all hoped it was, and there was the reminder on Sunday that this week is the first anniversary of the tragic death of a fellow church member’s young granddaughter. And there was another weekend report of my dad’s decreasing abilities.

It’s almost more than one can take. Where does it all end?

It may not feel like it in seasons like this, but the cruel and wretched enemy Death is itself in its death throes. Lo, its doom is sure. This doom was sealed at the cross—when God himself lost a dearly loved son—and three days later at the empty tomb, Death was defeated.

Therein lies our hope. The apostle Paul says it in words that, set to music by Handel, put a lump in my throat every time:

The victory has been won, but the truth is, death still stings. It stings a lot, and it will until that trumpet sounds. Until then, says Paul, “Stand firm. Let nothing move you. Always give yourselves fully to the work of the Lord,”—whatever the Lord’s work looks like in your circumstances—“because you know that your labor in the Lord is not in vain” (1 Cor 15:58).

Press on, dear friends, press on.