When I’ve taught Daniel 7 in the past, I’ve often started with some comic relief since I know what’s ahead in the chapter and the rest of the book. That comic relief looks like this: 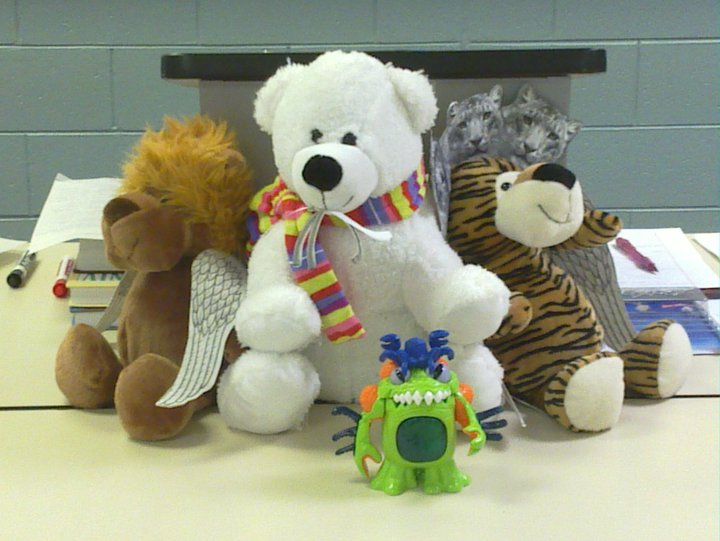 These critters (three of which are currently on craigslist sale – “lion, tiger, and bear! Oh my!”) are ridiculous representations of the four terrifying beasts in Daniel’s chapter 7 vision. (I know, I know, he saw a leopard-like beast, not a tiger. I had to go with what the nearest [and cheapest] store had in stock at the time…)

So, now that you’ve had your laugh, let’s get down to business. No more funny stuff from here on out. 😐

This chapter, the first of a series of visions and revelations that Daniel receives, opens with a date formula that sets us in the context of Belshazzar. If you remember (ha! Oh, sorry – no more laughs…), chapter 6 left off in the reign of Darius, which, despite general confusion about Darius’s identity, we at least know he comes after the fall of Babylon (539 BC). But chapter 7 turns back the clock a dozen or more years to the time of the last Babylonian king.

In his vision, Daniel sees a series of four mutant beasts rise out of a tumultuous sea. The first beast is “like a lion” with wings; the second is “like a bear,” a voracious, somewhat lopsided bear; the third is “like a leopard” with four heads and four wings; and the fourth is so ghastly and terrifying that Daniel has no point of comparison. It crushes and devours with its iron teeth and then tramples whatever is left. This creature has ten horns until an eleventh little horn sprouts, displaces three of the other horns, and more or less takes over the scene with its boastful, blasphemous speech.

Then the scene shifts away from the beastly horror and Daniel sees a fiery throne room with multiple thrones, one clearly more important than the others—the throne where the Ancient of Days sits. The rest of the court sits and “the books” are opened for, given what follows next, judgment. What follows is a quick shift back to the beasts, where the fourth beast is destroyed and burned. Then the scene returns to the throne room where “one like a son of man” appears with the clouds before the Ancient of Days, who gives him authority, glory and sovereign power over all nations forever—an everlasting kingdom that will never be destroyed.

If that doesn’t give you chills, you should stop now and put some ice cubes down your back.

Daniel, the one skilled in dream and vision interpretation, is baffled and bothered, so he asks “one of those standing there” (presumably an angel) what the vision meant. I love the answer: “The four great beasts are four kings that will rise from the earth. But the holy people of the Most High will receive the kingdom and will possess it forever—yes, for ever and ever.” Period.

Daniel found this answer unsatisfying (who doesn’t?)—I mean, who are the beasts? Why a lion, bear, and leopard? Why are they all different, and why are they mutant? What’s up with that fourth beast? Ten horns? Three displaced? What about the throne room – who are all the thrones for? Why all the fire? What are the books? You get the idea. Even the angel’s interpretation introduces at least one additional question: Who are these holy people – they aren’t in the vision?

So, feeling a bit like you, Daniel probes for more information, but he limits the scope of his questions to that nasty fourth beast, the ten horns, and the little horn. Before the angel can give him an answer, Daniel sees even more: The little horn wages war against the holy people (again, where’d they come from?) and, worse, is defeating them! Then the Ancient of Days comes and judges in favor of the holy people and they possess the kingdom.

The angel explains (well, sort of…): “The fourth beast is a fourth kingdom that will appear on earth. It will be different from all the other kingdoms and will devour the whole earth, trampling it down and crushing it. The ten horns are ten kings who will come from this kingdom. After them another king will arise, different from the earlier ones; he will subdue three kings. He will speak against the Most High and oppress his holy people and try to change the set times and the laws. The holy people will be delivered into his hands for a time, times and half a time. But the court will sit, and his power will be taken away and completely destroyed forever. Then the sovereignty, power and greatness of all the kingdoms under heaven will be handed over to the holy people of the Most High. His kingdom will be an everlasting kingdom, and all rulers will worship and obey him” (Dan 7:23–27 NIV).

I’m sure this clears everything up for you. At the very least, you have a better sense what’s ahead in this blog. If you want to bail now or just reread posts on chapters 1–6, I’ll understand. No hard feelings.