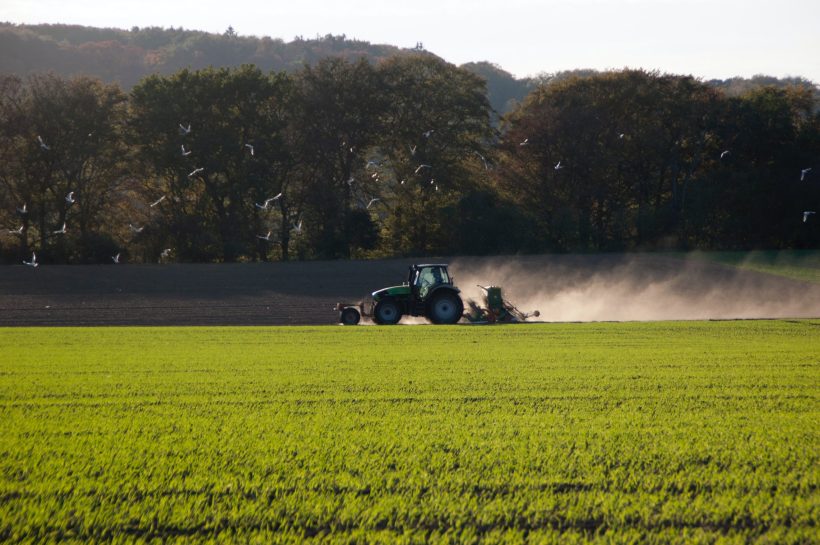 Most Minnesota mornings find one of us walking the dog. Zuzu takes the lead, ears bobbing and curlicue tail flipped over her back as she trots down the sidewalk of her choice—and yes, she does have an opinion.

One of my favorite routes takes us along a cornfield that forms the southern boundary of our subdivision. A paved walking trail runs between the field and a storm-water retaining lake bordering the southernmost row of houses. Removed from the manicured lawns and backyard playgrounds of suburban affluence, the path and its adjacent farmland evoke a walk in the country.

Rick and I mark time by that field, reporting back to each other when the seasons change. The tractor’s first appearance signals spring. Summer is around the corner when seedlings pop out of the soil, and it peaks months later when the corn tassels. Fall is upon us when the beans start to yellow, and it gives way to winter when the combine lumbers through the field. Then we pass the long winter months watching deer glean what looks to be barren terrain. There’s something reassuring about watching the land cycle as it has for millennia—farmers and fields, crops and harvest, desolate expanses and snow-covered clods of dirt. Repeat.

It’s important to mark time. Days are fleeting, and while we can’t slow them down, we do well to slow ourselves long enough to note their passage. To grieve their passage. To anticipate a new season. Life matters, every minute of it.

My dad died not too many weeks after COVID shut the world down. We were robbed, as were legions of others, of proper funeral rites. Instead of gathering with scores of friends and family to mourn a beloved one and celebrate his well-lived life, nine of us assembled in a cavernous sanctuary: my bereaved mother, my three siblings and their spouses, and the two of us. We spread out over four pews. The shut-down mandates allowed ten people at such gatherings, and our tenth “person” was a tag-team pair of pastors, emerging alternately from offstage to lead the ceremony or provide music. An elaborate livestream set-up occupied the center aisle, but the technician ran everything remotely from another room. The funeral staff waited in the lobby.

In the funeral plans made and paid for months earlier, my dad was to be sent off with military honors. Instead, the hearse drove away in silence, and we didn’t follow it. Our party of nine stood in a wide circle in the lobby and visited—the first time we’d all been together since Christmas. A short while later, the sister in charge of my parents’ finances said we should all buy lunch on our respective ways home and send her the receipt: Dad was paying for our funeral meal(s).

And it was over.

Rick and I ate our take-out lunch in the car before visiting the freshly filled-in grave site. Then we hunted in vain for an open coffee shop, settling for McDonald’s, and drove the five hours back to our home in Minnesota.

Eighteen months later, when the pandemic lulled between delta and omicron, our little church held a service of lament—on All Saints Eve, appropriately. We paused to remember those we had loved and lost but could not publicly grieve. We spoke their names, sang songs special to them (“Amazing Grace” for my dad), and read psalms of lament, such as Psalms 6 and 62. We meditated on Psalm 90, Moses’s prayer that begins with the familiar words “Lord, you have been our dwelling place throughout all generations.”

We marked the time and remembered.

The postlude to our service of lament was an arrangement of “Everybody Needs Jesus” and “Jesus Loves Me.” The song had been loved by the young patient of a church member, and its bee-bop melody made us smile. Mixed with the sweet refrain “Yes, Jesus loves me, yes, Jesus loves me,” it was an unconventionally perfect ending for such a service. We grieve, but not as those without hope. Jesus loves me, this I know.

Photo by Paddy Pohlod on Unsplash