You’ve probably never associated Nebuchadnezzar with any part of Christmas – and I can understand why – but I’ve found a connection. As a child of the 70s, I loved the Christmas TV special The Year Without a Santa Claus – not because I wished for such a year (though Santa never made it down our chimney – I think my parents blocked it off and just took care of things themselves), but because of the inimitable Heat Miser and his catchy tune, a song that easily sticks in your head from one December to the next.

What’s the connection with Nebuchadnezzar?

Look at this face. 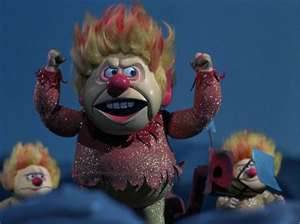 This is the face of the king in the story of the fiery furnace.

It’s a toss-up in the story which is hotter – the king or the furnace. First, he orders death-by-fiery-furnace for any dissenters in the statue-bowing crowd. Then when he learns that such dissenters exist, “in a furious rage” (v. 13) he summons them to his lair. Upon the Jews’ refusal to bow down, the king is “filled with fury” (vs. 19) and orders “the furnace of blazing fire” (vv. 6, 11, 15, 17, 20, 21, 23, 26) heated “seven times more than it was usually heated” (v. 19). How exactly would you measure this? Well, you wouldn’t. You couldn’t. The point is that the flaming mad king (whose veins are probably popping out all over) is as hot as he can possibly be, and so is the fire. Both are out of control.

Clearly in control are Shadrach, Meshach, and Abednego. Unfazed by the hot-headed monarch or his little hothouse, the three men stand tall. And in the end, neither the fiery furnace nor the fiery king could destroy the faithful Jews. Their rescue from the flames throws cold water on the king, who ends up praising their God (vv. 28–29) and respecting His followers.

(Don’t get too excited yet by Nebuchadnezzar’s change of heart; he threatens to tear people apart and turn their houses into ash heaps if they say anything against the Jews’ God [v. 29]. Really, he’s too much.)