It won’t be long now. We’re about to lose our dad for the second time.

We lost him the first time on June 1, 2005. That morning as he prayed with my mom—as he did every morning before the day got going—he suffered a massive stroke that robbed him of a great deal of cognitive and linguistic ability. As our family gathered around his hospital bed that evening, we were thankful that God had spared his life, but as we listened to his garbled and unintelligible speech, we wondered what that life would be like.

His recovery began in a rehab facility, where he spent two months doing some of the hardest work of his life. Dad had to relearn the alphabet, the names for nearly everything (including his four children), and how to read the face of a clock. We will never know how grueling that process was for him or how discouraging it must have been to a man whose only real hobbies were reading and writing. His efforts at recovery were a credit to the work ethic he’d learned growing up on the farm and to his sense of accountability for the gift of life. I don’t think it was ever an option for him not to do whatever was required.

Many people marveled at his recovery, and since he had no physical signs of having had a stroke, most people assumed he was back to “normal” by the end of his rehab—but those of us who knew him best knew he was never the same again.

He once described the earliest moments of the stroke by putting his hands on his head and saying he knew instantly that “it was all gone.” And while a lot of it was gone, he was still with us. Sure, he couldn’t read magazines and books like he used to, and sure, watching him try to write a sentence, sign his name, or do simple math was like watching a child do their homework. But he was still with us. His soft smile, his wry humor, his quiet laugh, and the twinkle in his eye. Those were all intact. He was still Dad, and he was still with us.

My dad’s last couple years of life also required a lot of grueling effort. Movement that had come so easily for so long caused significant pain. His bent-over back, gnarled hands, swollen feet, and stiff arms and legs made getting dressed an excruciating exercise. Shuffling from Point A to Point B in my parents’ small condo wore him out. Home health care workers helped him through the painful process of simply existing every day, and he could not have done without them. When Rick and I visited them in their condo, we were his home health care—and what we came to call “Amateur Hour” could not have been pleasant for my dad, yet he always received our awkward help with gratitude.

I used to pity older people when they appeared disheveled in public. Not anymore. After helping my dad get dressed so he could force his rigid limbs in and out of the car, I have nothing but admiration for people who show up, despite not being quite put together. After watching him all but grit his teeth to get wherever he was going, I know how much pain and steel-toed determination his presence represented. It would’ve been a whole lot easier to stay home in his pajamas—but my dad showed up (though not always quite put together if Rick and I were in charge). He was still there.

And he was still with us.

But not for much longer. Any minute, hour, or—have mercy, Lord—day, I will get the call I’ve dreaded and longed for all once—dreaded for me, for us, and longed for, nay, prayed for, for him.

We’re about to lose our dad for the second time. Whenever our family gathers, Dad won’t be there—in mind or, from now on, in body either.

There’s something about the physical presence of a father. For the last many years of his life, Dad did not contribute much—if anything—to family gatherings. He simply sat and watched, taking in what he was able to take in and letting the rest pass him by. But he was there. Dad was there, his mere presence the cornerstone of a family gathering.

We will grieve this second loss for a long time, but we also take comfort in the fact that we have not lost Dad for good. We will see him again and forever at the feet of Jesus, the one he served so faithfully for so long. He will have regained everything the stroke stole and everything old age took. He will be strong of mind and body again. He will be the dad we lost so long ago and more—made whole and made new forever.

We’ll see you there, Dad. 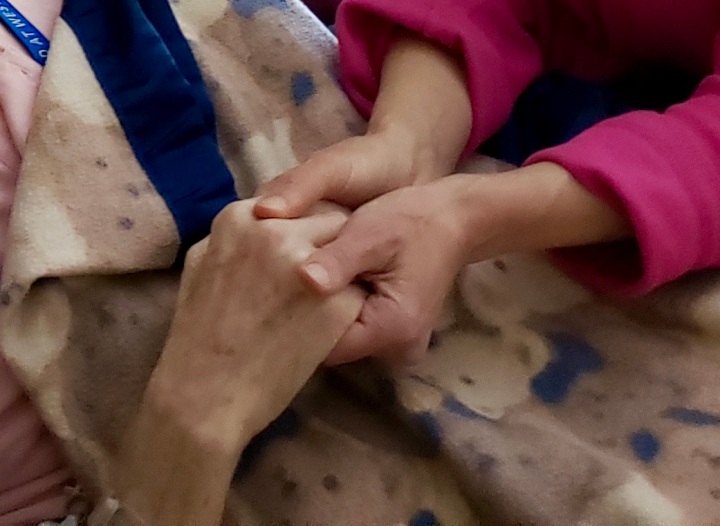